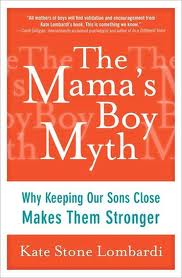 Although no one has ever called me one, I could probably be slandered as "a Mama's Boy" if someone wanted to. Not because I fit the stereotype of the weak, emasculated male adult, but because I have always had a close relationship with my mother. A friend of mine posted this review of a book challenging the Mama's Boy narrative, and I'd like to consider a little more closely some of the issues that are talked about in it.

Not only because they seriously impact our intimate relationships, but because they tap into some deeper issues around gender that need to be addressed head on.

For generations, mothers have gotten the same old message when it comes to raising sons: beware of keeping him "too close." A mom who nurtures a deep emotional bond with prevent him from growing up to be a strong, independent man. By refusing to cut those apron strings, she is on track to create the archetypal, effeminate, maladjusted "mama's boy."

First off, I want to say that there is such a thing as "too close" and "smothering." The parent who cooks, cleans, and pays all the bills for her son or daughter well into adulthood being one example. Another the parent who is so emotionally entangled with her child's life that she's regularly jealous of the child's friends or partners, and attempts to monopolize the child's time/attention. Given the sexist division of roles that have dominated our society for generations, often the parent in these cases is the mother, but fathers occasionally are like this as well.

Regardless, though, these are extremes. The jealous, overly involved mother is the stuff of made for TV movies. She does exist in the real world, but in no where near the kind of numbers people might expect. Furthermore, while many of us Gen Xers and younger are struggling to make in the rotten economy these days, the majority of us are not sitting in our mother's basements, playing video games, while being served dinner and getting our clothes washed and folded for us. And even though there are more of this kind of guy these days, blaming the mothers out there is way too simplistic.

Jen writes: It is also extremely interesting to note that we expect mothers to be close to their daughters--best friends in fact. But if a mother is close to her son--she is harming his masculinity.

There are all kinds of layers going on here. In sexist societies, masculinity is upheld as the standard bearer. Something of a pure, holy quality that must be protected from "evil influences." Such as too much mothering. While Americans have progressed a lot on this front, there's still a taint of this kind of thinking present. Furthermore, it's really obvious to me that behind "fears" about "loss of masculinity" is the massive homophobia and hatred of gay and bisexual men that still plagues too much of our world. And finally, there are all the capitalist narratives that have built up over the past few centuries at play here. Specifically, the idea that boys are to be prepared for two things: the world of work and world of war. Both of which mean separation from family, especially the women in the family. While the workplace and the military have become gender integrated in recent decades, those old stories still hold a power for many of us. What it means for a man "to grow up" still, despite the many changes in our culture, is still driven by notions of being a good employee, good defender, and a good provider to some degree.

As I have written in posts here before, there is a lot of confusion in the modern dating world. The majority of us under 40, as well as a number of folks over 40, simply don't believe in the "traditional" dating and relationship narratives anymore. But since there hasn't been any clear models to replace them in the mainstream, the void has left us scrambling. My own experience as a man in touch with his emotions, who wants an equal partnership, and who does not fit the mold of what constitutes "a masculine dude," I have found that many women are shifting through a mixture of liberated approaches, and clinging to the old story lines. They say they want a man who knows how he feels and can communicate well, but then when such a guy comes along, they are often tossing him aside for someone who is more "exciting," "rugged," "edgy," or simply more "sexually attractive." All of this is code in my opinion for "I kind of want that old masculine stereotype, but don't want to admit it to you all." And while it's totally true that some men become too sensitive, cut off their edge, and are simply so nice that they are dull - others of us are trying to actually figure out how to balance our personal power with emotional intelligence and compassion.

Back to the book review.

The Mama’s Boy Myth is a fascinating look at just how important mothers are to their sons lives. In an era when there is a boy’s crisis (rising violence and emotional constipation) Lombardi argues who better than mom, to help boys and young men talk through and process the emotional challenges of middle school, high school and college. Boys today are dealing with bullying, break ups, struggling with academics, girlfriends, peer pressure and so on…mothers, not fathers are better equipped to help their sons through the tough times. While we welcome more emotional men as fathers, it simply isn’t the case yet. Fathers just don’t consistently seek out emotional conversations with their sons. They weren’t raised that way. Fathers do not have the same skill set as mothers do.

I can't imagine what my life would be like if I hadn't had my mother around. She's taught me so much by her own example. Especially how to be true to myself, listen to my deepest callings, and to take risks, even when the majority of people think you are crazy for doing so. And it's also the case that my father was raised in the old school. It took him into my adulthood to really reach out and form a quality relationship with me.

But I have to say that our society, for all the nonsense right wing narratives about how "important" fathers are, supports fathers being more absent than not from their children's lives. Indeed, given the continued stigmas towards men who are more emotionally intelligent, men who want to stay at home and raise their children, men who act in any way "like women," is it any wonder that fathers struggle to really be there for their children.

Although some of the pressure to conform has lessened, the current cultural backlash aimed at the GLBTQ community impacts all of us. And one of things I see in that backlash is an attempt to re-establish rigid, heterosexually defined gender roles. Which makes me wonder if men my age (mid30s) or younger will actually continue to find themselves in a bind between being expressive, caring people and conforming to a stereotype of manhood they neither created nor really want, even those who more readily gravitate towards what looks like "traditional manhood."

While I am highly supportive of Jen's (and the book's author) calls for mothers to reject the old narratives, and be close with their sons, part of me longs for more support as a man who, as a former girlfriend once said "gets it." That calls to reject sexist narratives need to reject them fully, realizing that everyone is oppressed by them. Too often, adult men are set up as card board cut outs to be knocked down, and tossed away as "too screwed up" to be concerned with. It's always the next generation of boys being focused on. Always the future, in other words - rarely, if even, the present.

This work of supporting and upholding a more diverse "masculinity" is something men ourselves need to take responsibility for. But it can't be men alone. And actually, I'd argue that because liberating "masculinity" means freeing it from a rigid attachment to biology, such work requires folks across the gender spectrum. I have seen evidence of this work sprouting up in a variety of place, but it has to become much more prominent. Much more a norm even.

Breaking down the power of stories like the Mama's boy requires people questioning everything. Including what they find attractive in another person and why.