Because They're Not Getting Married 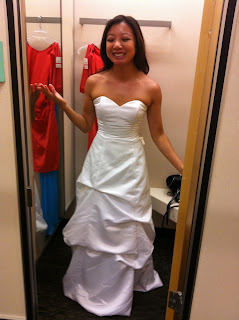 Yue Xu over at Singlefied is asking her fellow bloggers to spread the word about a wedding dress she recently found for an extraordinary inexpensive price, and is hoping to give away to someone who really could use it. Here are the details.

Listen, I’m a single gal and though I see a wedding in my future, it’s not in the near future. I have no use for this beautiful dress. Not to mention that it’s taking up room in my tiny studio. And hello, how scary would it be to bring a guy over with a wedding gown hanging outside my closet?! So, I would love to give it to someone more deserving. Maybe you have a wedding coming up and haven’t budgeted enough for a dress, or you want to dye it and turn it into your dream prom dress, I want to hear about it. Contact me (below) and tell me your story by 10/1/11, and I will choose one person to ship the dress to.

If you know of anyone who might be interested, drop Yue a line on her blog. Also, I encourage people to go read the story behind her getting the dress - it's quite fun.

Speaking of weddings, or non-weddings, I saw a movie the other day - Away We Go - where the issue of marriage seemed quite prominent. Specifically, what I found interesting was how the woman of the main couple in the movie repeatedly turned down her boyfriend's proposals for marriage. And she's doing this as she's pregnant with their first child.

Now, there's never any sense that this couple is in trouble. That they aren't committed to each other. In fact, as the movie goes on, it becomes quite clear the filmmaker wants us to view them as "the happy ones" amongst others who are struggling, miserable, or otherwise dysfunctional. The New York Times review I linked to is quite scathing of the film's depiction, and while I agreed with some of it, I found something refreshing in featuring a healthy couple that doesn't fit the standard narrative.

However, I also found this from near the end of the Time review compelling as well:

Really, “Away We Go” is about the flight from adulthood, from engagement, from responsibility, even as it cleverly disguises itself as a search for all those things. But the dream of being left alone in a world of your own making, far from anything sad or icky or difficult, is a child’s fantasy. Not an unattractive or uncommon one, it must be said, and for that reason it is tempting to follow Burt and Verona into the precious, hermetic paradise that awaits them at the end of the road.

Given the idyllic isolation of the home the couple chooses to settle and start their family in, far away from the troubles of their friends and family, I'm inclined to agree. And yet as a writer on modern relationships, and supportive of alternative models of being together, I also detect a strong whiff of conservatism in the reviewer's tone. And I can't help but wonder had this couple been "happily married" and about to have their first child, as is often the case in mainstream feel-good movies, if the review would have been a bit more "feel good" itself.